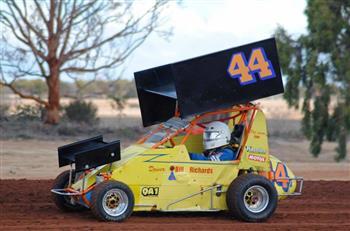 Bill Richards started racing a TQ Midget in 1956 at Bibra Lake Speedway and still holds a competition licence 63 years later. During this time he has set many records that will never be broken, such as competing at 55 West Australian Formula 500 titles, winning in 1974. He also won three short track West Australian titles.

His best results from 44 national title appearances was two third placings and a fourth, and he has competed in every state and territory in Australia. He was the winner of the final feature at the fabled Rowley Park Speedway and was inducted into the Claremont Hall of Fame in 2001. Bill has been on the committee of the WA State Association for over 50 years and has represented his State at the Australian Formula 500 AGM as a delegate for over 40 years. Bill was also a founding member of the Perth TQ Car Club and is a Life Member of both this Club and the Australian Formula 500 Association.