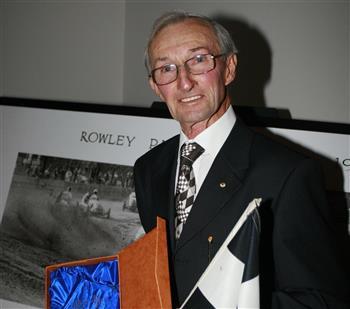 Glen Dix was introduced to the Racing Drivers Association of SA (RDA) by long standing secretary Ross Schultz in 1952.

The following season Dix assisted 5KA radio announcer Bill Evans as feature races were broadcast in those days and the announcer required up to the minute information.

An infield position was more appealing so Dix began his memorable flag-waving career as assistant to Rowley Park Clerk of Course, Em Sconce and took over the main job in 1954/55 for some 10 years with much flair and precision.

Dix was struck by a TQ in 1962, however he was not going to miss the first 50-lap Speedcar race in South Australia and watched the event from the Ambulance Centre roof with a broken kneecap. Dix had injected much behind the scenes effort into its special rules and was not disappointed when he witnessed American Bob Tattersall shed an inside front wheel and continued to race in a famous drive for a further 21 laps on three wheels!

He was called back by Kym Bonython to direct the first and subsequent 100-lap Speedcar Derbys and later by the group of drivers who promoted Rowley Park, headed by Kevin Fischer, as an advisor and program compiler until the RDA took control of the speedway.

Dix flagged the final Speedcar feature at Rowley Park Speedway in 1979 and clung onto the side of ‘Suddenly’ for a few quick laps with Bill Wigzell, waved the checked flag at the Australian Formula One Grand Prix in Adelaide (1985-95), was a special guest at the 2007 World 40-lap Speedcar Spectacular at Murray Bridge and attended the first two Australian Speedway Hall of Fame Induction Dinners.

In 2009 Dix was awarded a medal in the Order of Australia for services to motor sport and the community.