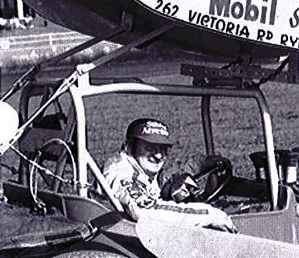 Sid Hopping was 15-years-old when he forged his parents signature to obtain clearance to race a Sidecar in 1952.

After sustaining a nasty injury from a crash he took a sabbatical from competition however still remained close to the sport filming events at Westmead Speedway for Television news. After witnessing Bill Warner driving a Super Modified at Westmead the racing bug bit once more. Warner purchased the orange number 26 “Mooneyes” Chevy Corvette Super Modified Sportsman racer from San Jose, California. Between 1964 and 1970 he rewrote the record books and changed the face of Australian Super Modified racing by resulting in sleeker and better- constructed Super Modifieds and also largely contributing to the introduction of the V8 Chevy engine into local racing. “Seeing Bill race that car, I was hooked. I bought the ex-Marshall Sargeant car off Blair Shepherd and I was back racing,” said Hopping. “That was one of the more significant moments in my life.”

Hopping later purchased the CAE Chassis from the USA that ultimately became the famous ‘Batmobile’ and at that moment Sid Hopping became a racing legend. The most memorable sight for many race fans was the amazing ‘three-wing’ arrangement on the car, especially the rear wing! “The

funny thing about the Batmobile was the back wing caused such a commotion on that car, people would wonder what performance advantage that it gave us, yet really all along it started as a joke and we left it on for show and not much else. It was placed in a location that wouldn’t really help the handling of the car,” Hopping elaborated. Hopping finished second in the 1968 NSW Sprintcar Championship and third in 1975 and was always a front-runner in NSW or when he travelled interstate to race. The battles between Rush in the Anderson Sprintcar and Hopping in his Super Modified were legendary. In late 1972 open warfare broke out at Liverpool when Rush and arch-rival Hopping shared the front row of a trophy dash event - Rush in the Anderson car and Hopping aboard a new Jim Hulbert CAE Modified out of California. In the run through the first turn Rush was left with no room to move at the top of the track and rammed the fence. The Anderson car overturned as the rest of the field moved around the circuit before coming to a halt in the main straight.

Rush was fuming and obviously enough was enough. He extracted himself from the car and ran 150 metres to the main straight where he confronted Hopping with a flurry of punches. Hopping was still seated in his car as officials attempted to control Rush. Despite the clash and opposition to the new Sprintcar, Hopping could see Sprintcar racing in Australia developing into a major show and the need for a dedicated venue to host this new ferocious style of racing. “I could see that Sprintcars were to be a force and I desperately wanted to build a track to specifically cater for them. I had taken my Super Modified down to the old Granville Trotting track quite often to perform engine starts and I thought that venue would be an ideal location for a Speedway track.” A local North Parramatta butcher by the name of Bert Wilder was Hopping’s business partner in this ambitious dream and finally after numerous challenges and obstacles, opening day for Parramatta City Raceway finally arrived on the 18th of February, 1977 to a packed house and it was at that moment Sid Hopping knew he had created something special. Built in an era when Sydney race fans could choose from several Speedway venues on any given weekend PCR has remained as the sole survivor in Sydney, thanks largely to Hopping’s forward thinking. Hopping would work tirelessly to remove the trotting guard rails, prepare the race track, promote and run the meeting, scrape off all traces of clay from the outer trotting track and reinstate the guard rail for the trotters to practice the very next day.

Friday nights and Saturday mornings would often be a blur for Hopping and sometimes he would finish the process so late, he would stagger straight to his lawn mowing business during the daytime on Saturday with no sleep at all the previous night.