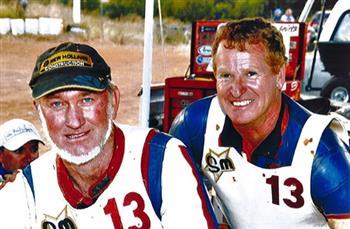 His father Roger and Uncle Arthur both raced at the Yanchep circuit and Dennis Nash began riding Motorcross on a BSA Silver Star.

He commenced racing at Claremont Speedway in 1967/68 as a passenger for Danny Smith at the tender age of 17 and then progressed to become the main rider aboard a Triumph 650, then a Stan Dyson Vincent, a Suzuki 750 water cooled machine, Honda 2 Valve, 4 Valve also going on to design and build the Nashmobile racing frame.

He was third in 1973 Australian Sidecar Championship at Rowley Park and then won his first National Title at Newcastle with Russell Hearn in 1976 becoming the first Western Australian rider to win the event. He was second during his title defense at his home track Claremont Speedway and runner up again in 1980 at Avalon Raceway, Geelong, this time with Dennis Mortimer, before bouncing back to win the title at Claremont in 1981.