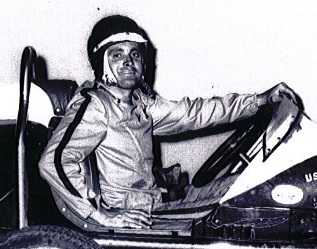 Blair Shepherd was a spectacular driver, with a striking, imposing, yet flamboyant style to his racing with his gold overalls and black and gold livery.

His career began when he purchased the Steve Howman Holden and Len Brock convinced him that the Sydney Showground was the best place to learn the trade and as fortune would have it, Blair won his first race there.

His used car dealership was a short distance from the Ekka in Brisbane, which became a speedway landmark. Shepherd’s first feature event win came at the Ekka on May 12, 1962, driving the Repco Holden. The following year he won the Steve Howman Memorial.

Shepherd did not take too kindly to being beaten by the Americans in their imported Offys so a deal was struck with John Sherwood and Frank Arthur to buy the Tattersall Casio Offy in 1962 and it was at this point his career sky rocketed. He made the local newspaper as the first Queenslander to own an Offenhouser.

In late 1966 he drove the Champion Muffler #3 Offy he acquired while on a trip to America before the car was decked out in his familiar colour scheme with the famous #99. He recruited the talented Bob Morgan to drive a second car and the pair dominated at local and interstate events.

Shepherd is a two-time winner of the Queensland Championship, 1963 and again in 1964. With a marvellous record of 57 victories, he is the second highest winner on his home track, the Brisbane Exhibition Ground, to Ron Wanless with 63 wins. He took out the 1969 Australian Speedcar Championship and has won the World Derby on two occasions. His first in 1964/65 was also the first time a Queenslander won the event leading home a star studded field including Bill Goode and Merv Neil from New Zealand.

He was selected in the Australian test team squad twice where he won a further two feature races at the Western Springs Speedway in New Zealand. In Victoria he won two Craven Filter State rounds.

During the sixties’ driving the fabulous WRM Offenhauser, he was the holder of the 20, 25, 30 and 50 lap records on the quarter mile Ekka.

He was always coming up with something to thrill the crowd like the time he placed a wing on top of his cage less Midget as a gimmick and probably goes down in history as the first Australian driver to fit a wing to a Speedcar and had his own personal Black Flag, gold lined of course.

Shepherd made a comeback to racing in 1972/73 driving a Super Modified for Ron Wanless who he at one staged promoted Archerfield Speedway with. His return was the result of a careful piece of friendly persuasion by Harold Gilder and Exhibition promoter Bill Goode and attracted a very good crowd for the meeting. He went on to drive the Wally Baker/Gary Paterson #99 owned by John Dean and owned the ex-Marshall Sargent Corvette with John French behind the wheel before retiring.