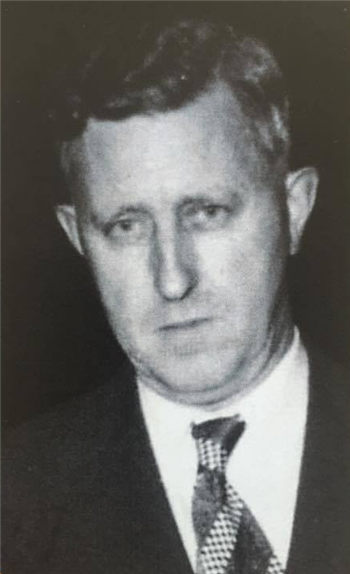 Sherwood was a former road racer and Midget driver at the Penrith Speedway during the 1930s. He joined Frank Arthur during the 1940s to form Empire Speedways, who promoted both the Sydney Showground and Brisbane Exhibition Ground. Arthur and Sherwood were responsible for bringing English Stock Car racing to Australian during the 1950’s (Saturday November 27th 1954), which injected a much needed boost to the sport at the time. Although Sherwood was reluctant at first the meeting was a huge success. It has been said that the attendance for this meeting was an all time record for the Royale, in excess of 50,00 people.

The competitors knew that when the top deck of the famous Members Stand, at the northern end of the arena with the clock tower behind, was full that they would get more prize money, as they shared the gate takings.

Sherwood managed the Showground throughout the boom years of the 1960s up until the early 1970s and was responsible for the re-birth of the Australia verses England Solo Test Matches in 1967. Australia’s huge Speedcar boom of the 60’s had begun to wane and Sherwood saw the need for something different so he called Australia’s number one rider, Jim Airey, who was racing in England at the time and asked if he would captain the home squad. Media hype assured that the series was a success with newspaper and television reporters flocking to the Sydney Showground for the Lions’ first look at the ‘Royale’, while Nigel Boocock was an invited guest on the prime time Tonight Show which beamed live into millions of Australian homes. Afterwards the entire match was broadcast in a delayed telecast. The official attendance was 35,000.

Sherwood prepared in advance so nothing became urgent and there was never an empty moment in the Showground program without an announcement explaining the delay. He would make notes throughout a meeting of anything coming to his attention that might need action in the future such as a replacement season pass, equipment maintenance or information for the next program. Occasionally he would note a particularly good drive or exciting finish and pay some form of bonus to those concerned. He also offered financial assistance to someone who suffered physical or mechanical misfortune, however this was kept private.

Sherwood kept a scrapbook of newspaper clippings which mushroomed with Mike Raymond on board through the 60s. He tried wherever he could to have sponsors names included in press releases. During the 1960/61 season it was noted for the first time that four Offenhauser-powered Speedcars raced at the one meeting so Sherwood organised a special match race between Bob Tattersall, Leroy Warriner, Jack O’Dea and Ray Revell which was won by American Warriner.

He was speedway’s ultimate promoter with fantastic organisational skills. During World War II he was the commanding officer of a general transport unit in the AIF with the rank of major. He was in charge of 700 troops and his command’s equipment included 400 trucks and 50 motorcycles. Hence his excellent time management skills.