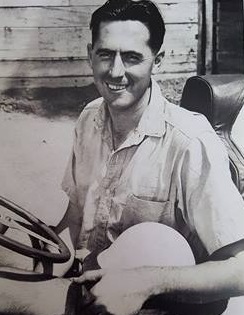 Johnny Schonberg, who had settled in Sydney after being discharged from the US Army, introduced Sir Jack Brabham to Speedway. Schonberg occasionally drove a Midget at the Sydney Sportsground. During an overnight stop in Brisbane, on their way from Sydney to Darwin for a disposal sale, Schonberg noticed in the local paper that the races had been washed out Saturday night and were now on Monday. Schonberg introduced Brabham to some of the drivers as they looked over their cars and after seeing the racing first hand Brabham was impressed but convinced they were all lunatics.

Back in Sydney Brabham watched Schonberg race a few time before they decided to build a car together with the help of Ronnie Ward and Bill Armstrong. After 4-5 months they had constructed their first Midget with a tubular chassis fitted with a Morris Cowley gearbox cut in half to provide two gears, a Harley-Davison clutch, Amilcar hubs and a troublesome 1000cc Jap motor.

Motorcycle ace Art Senior helped bore the engine out to 1100cc for the 1946/47 season. They decided the JAP engine just wasn’t up to the job so Brabham built a 1350cc engine and when Johnny’s wife convinced him to stop racing in the winter of 1948 it left them with a car and no driver. Following some pointers on the Tempe mud flats, Brabham entered some Wednesday night races at Parramatta Speedway. Being a novice he had to start at the rear and by his third meeting he won the feature from the back of the 12-car field.

The big time of the Sydney Showground beckoned and Brabham entered three races and won them all. Empire Speedways latched onto the story giving Brabham a lot of attention. During his first season at the Showground he won the NSW Championship. Brabham had a knack for Speedway racing and during six seasons never turned the car over. He raced in Brisbane, Melbourne and Adelaide.

One year he beat Ray Revell to the track championship, and a very nice gold watch, by one point. Racing three times a week at Parramatta on Wednesday, followed by the Sydney Sports Ground on Friday’s and the Sydney Showground on Saturday Brabham could earn up to 50-75 pounds a night when the weekly average wage was 6-10 pounds.

He won the Australian Speedcar Championship in 1949 at the Sydney Showground, 1950 at Rowley Park and 1953 at Cumberland Oval. During his fourth annual visit to Adelaide wining all four races including the South Australian Championship Brabham coasted infield with the Midget ablaze. After all the building and engineering Brabham had done he realised he had achieved everything worth doing in Speedway and it was time to move on.

He’d already entered the Midget in a few Hillclimbs and won the 1951 Australian Championship, which sparked his interest in tackling serious road racing. To finance his road racing ambitions Brabham sold his car to Kym Bonython, however he continued racing Speedcars for a few years driving for Spike Jennings in a Harley-Davidson vee-twin cylinder engine built by Ted Dark. Brabham would finally bid Speedway farewell when he purchased his next road racing car, the RedeX Special, in which he really made his mark.

As we know Brabham went on to become the Formula One World Drivers Champion 1959, 1960 and 1966, contesting 126 Grand Prix from 1955 to 1970 with 14 Grand Prix wins and is the only driver in Formula One history to win the championship in a car of his own construction. He became Australian of the Year 1966, was awarded the Order of the British Empire in 1967 and knighted for his services to motor sport in 1979. He passed away in 2014 at the age of 88.