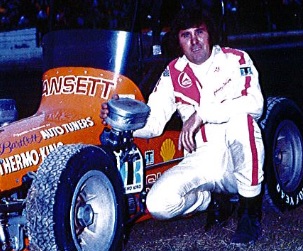 One of the truly great Midget drivers to come out Western Australia, Johnny Fenton showed his true versatility by winning Australian Titles on dirt at the Rowley Park Speedway in 1975, and on asphalt in 1976 at Sydney’s Liverpool City Raceway.

Leading up to those Australian titles, he was runner-up in 1971 and placed 3rd in 1972, 73, and 74. He holds a unique record of winning 10 career feature races in the one season in Perth! Fenton is a distinguished Western Australian Champion by winning the state title 7 times and being runner-up on 5 occasions. He has won a total of 59 career feature races on the old Claremont Speedway, more than any other Speedcar driver.

He began racing Go-karts at age 14 and later Hot Rods at Claremont in 1964. Progressing to Super Modifieds he raced against legends Dick Briton and Larry Burton.

In 1968/69 he made the switch to Speedcars commencing on the same night as Keith Mann and Charlie West in a Holden. He later purchased a Sesco from Hank Butcher and went to NZ for the first of seven consecutive visits.

Fenton purchased the ex AJ Foyt Voltswagon in 1976 and won the Bob Tattersall Memorial from Larry Rice in NZ and the following week finished second to him in the World Speedcar Derby.

Fenton won the 1976 NT Speedcar Title and the 1980 NT Sprintcar Title driving for Sid Moore. He retired from racing to promote the Bunbury Speedway and then Motorcross.